Iron was always a popular material for tools, but during the Middle Ages people started putting iron grills over doors and windows to make them safer. It also became a decorative element. Specialized workers made them into beautiful shapes. In America in the 1860’s, iron became a common material for doors. A famous example is the door at the Biltmore House, which was built in 1889. Iron became less popular as a building material as steel became easier to make, and they were mostly phased out by the 1970’s. 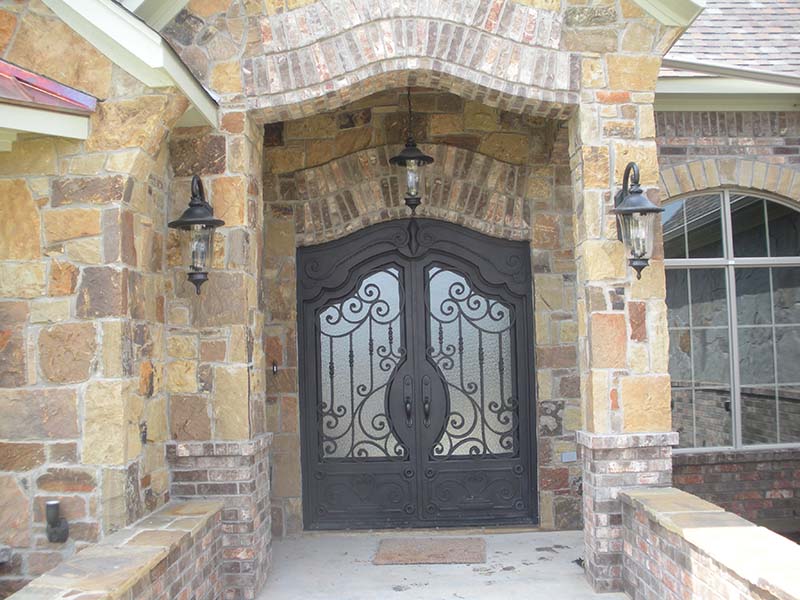 As a consequence, you will see some homes from the early 20th century and late 19th century with ornate wrought iron doors. Since the iron was very strong and resisted weathering, people liked it for prestigious homes and hotels. These doors had sinuous grape vines and ivy formed out of puddle iron over glazed glass, and were often shaped like a corbelled arch. If you happen to be lucky enough to buy a home from that era, you might find that an iron door suits it best. The traditional, solid doors have a couple of advantages for historical homes:

1: The doors make wonderful focal points. Wrought iron shapes are understated, but they keep the eye so that visitors to your home will have a favorable impression from their first arrival.

2: New iron doors are thermally broken to insulate the inside of a historical home. Homes were big, and the houses can be hard to keep the temperature regulated. Putting an iron door in the front helps keep out the heat.

3: Iron doors look traditional, and thus match the look of traditional homes. The ornate look blends into the general luxuriousness of historical homes.

If your home could use the antique charm of a wrought iron door, contact us. Iron Doors Plus prides itself in its customized gates and doors for people.

Call To Place Your Order Today!

This patent pending product is “like furniture polish for steel” Whether indoors or outdoors, steel will fade and eventually rust. Contact us today to learn more about Steel Saver ™!

About Iron Doors Plus

Take a look at our online catalog. You’ll be impressed with our quality, price and quick delivery! Learn More

Iron Doors Plus Inc. design & manufacture the finest handcrafted iron entry doors & estate gates. We are successful in providing our customers with personal detailed service & beautiful, quality products. We are committed to the client and providing for their needs. Learn More